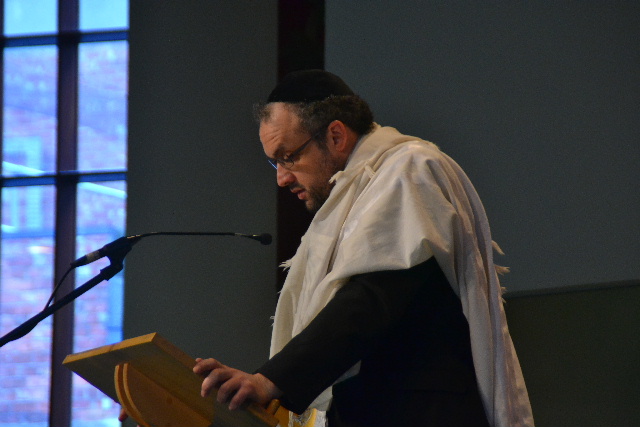 Rabbi Ariel Abel is married to Shulamit who is of Colombian Spanish crypto-Jewish origin (Anusim). They have a daughter, Yasmin Alejandra and currently reside in Darwen, an old mill town in the county of Lancashire. Both Ariel and Shulamit have four children each from former marriages.

Ariel is rabbi of the historic Liverpool Old Hebrew Congregation. He has previously served as the rabbi of London congregations (Waltham Forest and Radlett 2002-2010) and has accumulated almost a decade serving the Jewish community on Merseyside (1999-2002, 2012-current). From 2005-2010 he served as Director of the Montefiore Endowment Semicha Programme at Lauderdale Road. Since May 2017 Rabbi Abel has held a Territorial Army Commission of Captain and serves as a Chaplain or “Padre” to HM Forces.

He delivers his ecumenical ministry in the army and liaises with the Zionist worldwide Noahide organisation, Jerusalem and the Spanish & Portuguese-led Noahide centre and Jewish community in Rotterdam. In the wider community Rabbi Abel works with of ex-Christians and others of Jewish descent to advance the Noahide creed. Internationally, he is an active member of the Spanish & Portuguese rabbinic body “Obadyah Alliance”.

Discovering the Hidden Roots of the Banilejos

During June of 2015, an anthropological and sociological study was conducted in the Dominican city of Bani. On the surface, the banilejo people appear to be devout Catholics. However, having had access to their personal lives, it was evident that their peculiar family traditions and folklore hinted at their liminal identities.

This study involved interviewing 23 female subjects with questions found in the Spanish and Portuguese inquisitorial manuals. In addition, their mitochondrial DNA sequences were analyzed and demonstrated a high percentage of consanguinity and inbreeding within Bani’s population. The genetic analysis of their mitochondrial DNA yielded genetic links with Jewish women from worldwide Jewish communities. Victor
Turner’s communitas theory and Geertz’s thick description were used as the methodology.

Ultimately, the sociological and anthropological analysis of their way of life evidenced how their ancestors preserved Jewish identity covertly throughout the Inquisition time period (1481-1834) and how they continue to perpetuate it in contemporary times through consanguinity, and the power of superstition and taboo.

Hakham Yehonatan was born in Miami, Florida and comes from Caribbean Sepharadi family, via the Dominican Republic, Curação, Holland, and Portugal. He received his rabbinic and hazzanuth training initially under Ḥaham Yosef Benarroch z”l. Moreover, he is a certified shoḥet and mohel. He also studied for a time at the Shechebar Sepharadi Center in Jerusalem. He was ordained by Hakham Mordekhay Levi de Lopes in 2008.

In 2009 he moved to the Dominican Republic and established the Sepharadi Beth HaMidrash Eleazar, also serving as the shoḥet of the community. In 2013, he founded the Caribbean Kashruth Authority in order to supply kasher food throughout the country.

In 2015, he was voted as the U.S. representative of Confederação dos Judeus Brasileiros, a political entity that represents the interests of Brazilian Jewry.In May of 2016, he completed a Master’s of Arts in Sepharadi studies at Florida International University, concentrating in Latin American and Sepharadi studies. Thereafter, in July of 2016, he was trained and certified as a mohel by Hakham Yoel Dayan. Presently, he is pursuing a doctorate degree in International Law at the Asser Institute at the Hague, Netherlands.